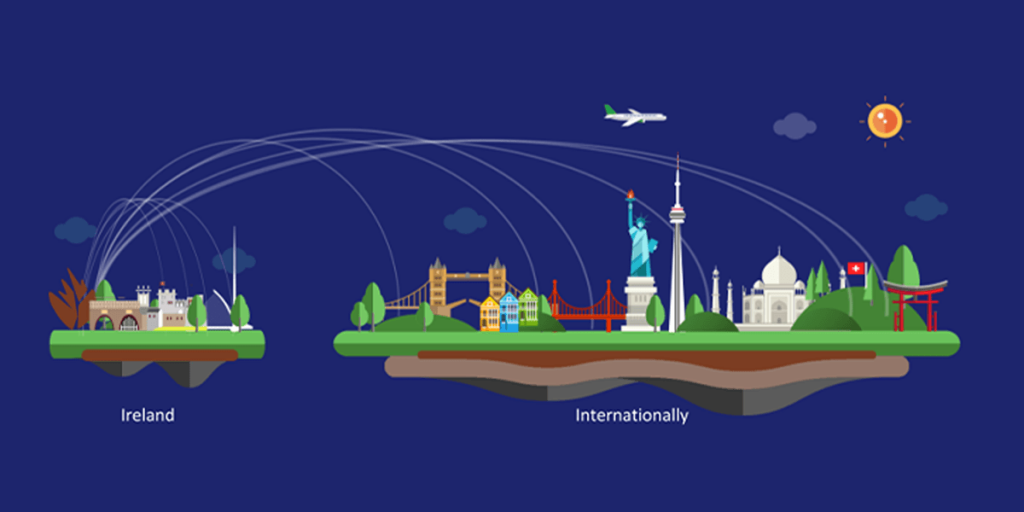 A recent Future of Work survey highlighted the growth of remote working and addressed how large MNCs are implementing policies to support employees transition, We now know that a likely consequence of COVID -19 will be a hybrid working model. In a recent CNN interview, Bill Thoms, Chairman of KPMG summarized the future of work as one where employees will work between ‘home, hub and office’ stressing that people want to ‘interact, collaborate and innovate’

Countries like Barbados are attracting talent and offering warmer climates and tax incentives. The “Barbados Welcome Stamp” allows you to live and work there for up to 12 months and be exempt from Barbados income tax.
The opportunity is further strengthened by the option to pay zero taxes here in Ireland. Marianna Hunt recently wrote an article in the Telegraph detailing ‘destinations tempting remote workers with tax perks and cheap visas’, it is a definitely worth a read.

Many MNCs have implemented policies requiring staff to return to their country of employment citing in part ‘tax and legal reasons’ for their decision. Colm Gorey recently wrote an article about Google’s decision to bring employees back. The impact of global remote working on attracting talent to MNCs here in Ireland is yet to be determined, as one MNC recently explained ‘we are currently reviewing our HR policies ‘to accommodate team members who want to live and work from Spain, it could mean ‘less tax for them and for us’

In addition, many of our indigenous startups are also considering making a break for the border. Over the last six months, Galway City Innovation District has seen 5% of its PorterShed members take advantage of global remote working.

Global remote working is in its infancy and this is the tip of a potential iceberg. In addition to the obvious loss of income tax and impact on the economy, there is also a direct negative impact on our startup ecosystem, the need to interact, collaborate and innovate is fundamental to the growth mindset. If we lose innovators to the world of global remote they will interact, collaborate and innovate somewhere else, many will permanently stay remote and Ireland will lose talent and the potential to create high-value sustainable jobs.

We have two options, watch the exodus or become part of the global solution. The government should consider policies to incentivise startups and employees of MNCs to choose Ireland, we need to encourage people back to our hubs and communities and amplify the platforms we have created to interact, collaborate, and innovate. Nurturing talent needs to be high on the agenda.

If you are working remotely from home and considering a global remote move, why not check out the many Tech and local hubs around Ireland before you book that flight, we promise an engaged community of like-minded peers.

Galway and the West of Ireland have become a hotbed for entrepreneurial activity in recent years. In fact, you may not know it but the word “entrepreneur” was coined by an Irishman from the Wild Atlantic Way. Richard Cantillon, born in the coastal town of Ballyheigue, County Kerry, came up with the first known definition of an entrepreneur in the business sense in his French book “Essai”. He defined entrepreneurs as “non-fixed income earners who pay known costs of production but earn uncertain incomes, due to the speculative nature of pandering to an unknown demand for their product”. Would you believe that Cantillon’s definition is from 1730, nearly three hundred years ago? It could have been written just yesterday.

A wave of tech and medtech entrepreneurs sprouted up in Galway following the closure of DEC’s hardware plant in Galway in 1993, and in the intervening years we’ve had innovation-driven enterprises founded in the West scaling to provide hundreds and thousands of jobs, and sometimes exiting for tens or hundreds of millions of euro. We need to ensure that we continue to get enough new founders with the requisite entrepreneurial spirit and skills into the startup pipeline at one end, then provide appropriate spaces and supports for them to succeed, and at the other end, make sure that we can help the scaleups to raise the significant sums of capital that they will need to dominate global markets. To this end, I wanted to highlight five ‘S’s where we have done well but where all stakeholders will need to do more, so as to provide the structures that these startups and scaleups will rely on to grow and thereby power economic activity in our region.

We have had a fantastic surge in startup founder events over the past few years. From early meetups like Startup Galway and MedTechBrew going back five or six years, the number of events where you can now hear from and meet a successful founder, and be imbued with the spirit of entrepreneurship, has grown by an order of magnitude. We need more of the fantastic founder role models in Galway and the West of Ireland – women and men – telling their stories, getting people enthusiastic about being an entrepreneur, and showing that you can make it here in the best place in Ireland to live. Galway success stories need to be told in classes, at events, in the media, because we are behind the curve in terms of startup creation. Galway is lagging behind Limerick, Cork and Dublin as regards new company formations per 10,000 population, according to a recent OECD report on SME and Entrepreneurship Policy in Ireland.

Why do startups fail? There are many reasons that are even more important than the idea itself, but not having the right team, or more precisely, the team with the right skills to execute in appropriate markets is certainly a key part. Programmes like TechInnovate, AgInnovate, and BioInnovate teach structured entrepreneurship skills and processes to those who take our courses. But can we deliver entrepreneurship skills to a broader base? To all of our industry and higher education institution researchers – staff and students – who are inventing technologies but don’t know if they are commercialisable, and if they are commercialisable, what to do next with their innovations? Can we broaden it even further so that all STE(A)M undergraduates take an entrepreneurship course in venture creation or new enterprises, just as many science/engineering or commerce students take a statistics module by default? Because no matter who you are in an organisation, a precise understanding of the customer for your product or service will help you to do your job better, even if you are not the ultimate founder or boss. What other skills do the “hackers, hustlers and hipsters” in our startups need? Are there gaps in sales, design skills, etc.? Let’s figure it out, talk to groups like the West Regional Skills Forum, and then fill them in!

The PorterShed has transformed the number of tech companies locating in downtown Galway. From there being about five tech companies downtown just five years ago, we are now at about 50 companies downtown between startups and FDI. The job isn’t done, however. Spaces for startups who have scaled and want to remain downtown is currently an issue, but will be served by Building #2 from the Galway City Innovation District and hopefully others. As more startups and scaleups – and an increasing number of FDI companies – see downtown Galway as a more attractive alternative to Dublin or even other countries to work and live in, we need to think ahead. Office block developments currently ongoing at the docks will help, but a greater quantity of both high quality working and living space in downtown Galway will need us to all get behind the Port of Galway, the Nuns Island development, and other initiatives to make sure that we can continue to grow – taking inspiration from Dublin and from many other growing cities globally.

There are many other great organisations providing excellent supports to Galway startups: Enterprise Ireland, Údarás na Gaeltachta, the Local Enterprise Office, and more. Organisations like WestBIC also provide support to help startups with their business plans for further investment, and to access European startup funding programmes. Scale Ireland has been formed to represent the needs of innovation-driven enterprises or scaleups to Government, and help inform better policy. I’ve observed however, that many up-and-coming startups just don’t know what kind of supports are all around them, or how to get access to the various regional, national and European resources: government, university, corporate customers, or otherwise. We need better matchmaking (a Galway Startup Commissioner) and promotion to make sure that startups don’t miss out on the resources available to them: a startup guide could be sent to every new Galway company that registers with the CRO with information on everything from national feasibility grants to European Fast Track to Innovation funding and Marie Curie Society & Enterprise Fellowships.

We are fortunate to have region-specific entities like the WDC Investment Fund providing vital funding to startups scaling in the West, the HBANs for angel funding, the two regional accelerators in the PorterShed and BioExel, and of course companies can avail of significant national grants from state organisations like Enterprise Ireland, Údaras na Gaeltachta, and the LEOs. Raising serious sums of money or Series A, B and C funding is a huge challenge, and more needs to be done – not just in terms of getting the investors over here to see our quality startups and scaleups and vice versa – events like Venture West and various VC talks in the GCID or BioInnovate have been useful as regards bringing the VCs here from outside of the Pale or from Europe and the US – but in terms of making sure that the various agencies and capital providers recognise the ambition and potential of the great startups in Galway: not just half filling the fuel tank on the way to the airport.

I just wanted to finish by stating that Galway is the best city in Ireland for starting a business. And it’s not just me saying it: the World Bank’s “Doing Business in the European Union 2020” report, published last month, confirms it. The report lists some areas for improvement, and along with more efforts around those 5 ‘S’s above, if all stakeholders work together, we can cement Galway’s place as the best city in Ireland for startups and scaleups.

John Breslin is a Personal Professor in the College of Science and Engineering at NUI Galway. He is the Chair of WestBIC, Co-Founder of the PorterShed / Galway City Innovation District, and a Member of the Steering Group for Scale Ireland.